It is a great honor to hold the “Book of the Month” seat at RWISA for February!

So, I’m going to do a little more shameless self-promotion.

In a recent podcast, I was asked what kind of man Luke Stone (aka Rick Sikes) was.

He stood 6’2″ and had a larger-than-life persona. In the opening chapter of “Flowers and Stone,” this is shown by the way the owner of the night club reacted to him coming through the door with his band.

Just as her dance performance came to an end, she(Darlina) heard a commotion. Turning, she saw Marketa personally escorting a group of customers to the best table in the club. It was totally out of character for this spitfire of a woman to make a fuss over anyone. Marketa flitted around with her long elegant ivory cigarette holder in her hand.

Amidst enthusiastic applause, the bright spotlight now off her, Darlina hurried to talk to Sherry.

Sherry rolled her eyes. “That’s Luke Stone and the Rebel Rousers. I can’t believe you don’t know that.”

“How would I know? You forget I don’t get out much other than here.”

“They are only the hottest band in the whole State of Texas.”

“Hell yes, I know ‘em. Had a one-night stand with the drummer a year or so ago.”

With overwhelming curiosity, Darlina proposed, “Let me wait their table.”

Sherry shrugged her shoulders, “Suits me.”

Darlina hurried to the table carrying menus. “Evening folks, I’m Darlina, and I’ll be taking care of you tonight.”

Luke Stone, an assuming man over six feet tall with a swagger and crooked grin promptly replied, “Honey, are you sure about that?”

A hot flush spread across her cheeks at his implication. “Let me re-phrase that. I’ll be taking your order tonight. What can I get you to drink?”

“Well, seein’ as how you don’t serve whiskey here, guess I’ll be havin’ a cup of coffee,” Luke said, leaning back in his chair and lighting a King Edward cigar.

I’d be thrilled if you’d pick up a copy of “Flowers and Stone” today! And if you do, PLEASE leave a review once you’ve read it.

I’d also like to invite you to find out more about the amazing, supportive writing communities, THE RAVE REVIEWS BOOK CLUB, AND THE RAVE WRITERS INT’L SOCIETY OF AUTHORS.

RRBC sponsors an online Writers’ Conference and Book Expo each year. The dates for 2019 are August 12-18. Registration is NOW open. This is a conference you DO NOT want to miss. And, you can attend from your living room in your pajamas. 🙂

RRBC and RWISA author, Ron Yates has just released the third and final book of his Billy Battles series and I am honored to host him here today!

Where in the world is Billy Battles?

As Book Three of the Finding Billy Battles trilogy begins we know where Billy is. He is in Chicago with his wife, the former Baroness Katharina von Schreiber living a sedate and comfortable life after years of adventure and tragedy. That changes with a single telephone call that yanks Billy and Katharina back into a life of turmoil and peril.

Persuaded by a powerful old friend to go undercover for the U.S. government the two find themselves in Mexico during the height of the violent 1910-1920 revolution. There they encounter assorted German spies, Mexican revolutionaries, devious political operatives, and other malefactors. Caught in the middle of the 1914 American invasion of Veracruz, they must find a way out while keeping their real identities secret.

After managing to extract themselves from danger, disaster strikes. It is a tragedy Billy is all too familiar with and one that will send him plummeting into a painful abyss of despair and agony. Consequently, Billy vanishes leaving family and friends to wonder what happened to him. Where is he? Is he dead or alive? What provoked his disappearance? In Book 3 of the Finding Billy Battles Trilogy, those questions are answered, and the mystery behind Billy’s disappearance is finally revealed.

And now a little about the rest of the series 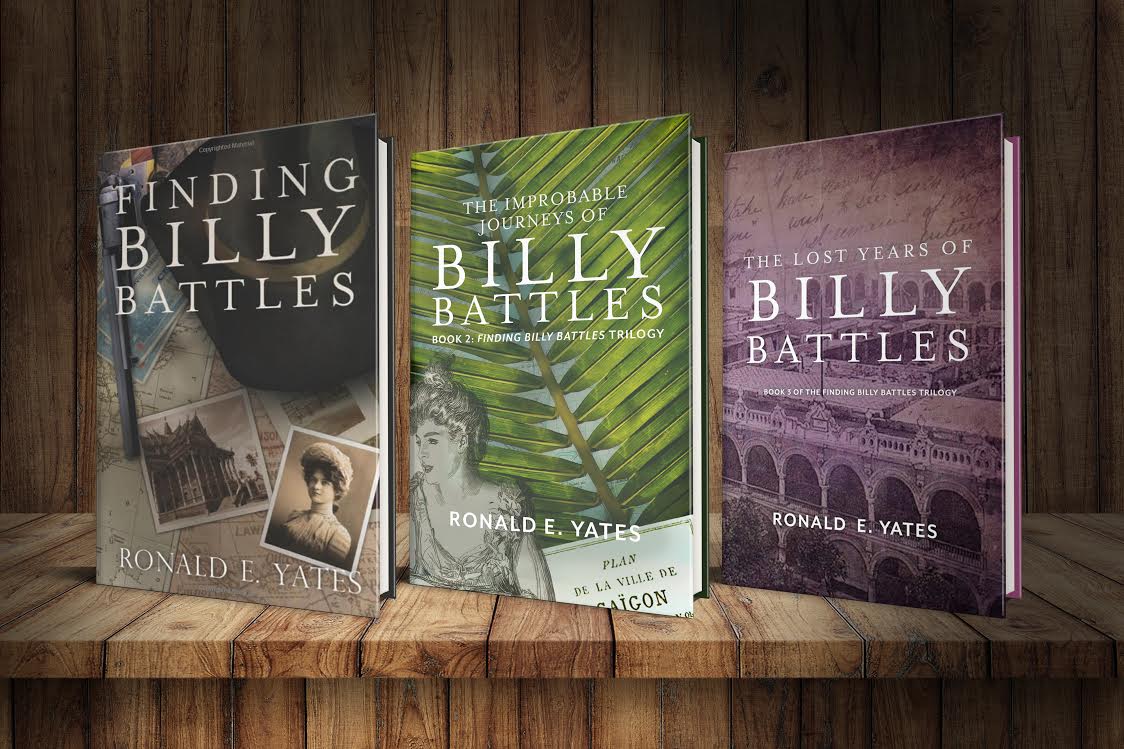 About the Finding Billy Battles Series

The Finding Billy Battles series tells the story of a man who is born in 1860 and who dies in 1960. In between William Fitzroy Raglan Battles lives an improbable and staggering life of adventure, peril, transgression, and redemption. Then, Billy (that’s what his friends call him) mysteriously disappears. For several years his family has no idea where he is or what he is doing.

Finally, with his life coming to an end, Billy resurfaces in an old soldiers’ home in Leavenworth, Kansas. It is there when he is 98 that he meets his 12-year-old great-grandson and bequeaths his journals and his other property to him — though he is not to receive them until he is much older.

Years later, the great-grandson reads the journals and fashions a three-volume trilogy that tells of his great-grandfather’s audacious life in the old west, as well as his journeys to the Far East of the 1890s—including French Indochina and The Philippines—and finally, in the early 20th century, to Europe and Latin America where his adventures and predicaments continue. Trouble and tragedy dog Billy his entire life. In each book of the trilogy, we witness Billy’s ability to handle setbacks and misfortune as well as his successes and relationships.

Each chapter in the trilogy blends historical fact with fiction. The chapters are meticulously researched down to the last detail so readers not only find themselves immersed in a compelling story, but are exposed to historical events and real people that make the worlds of the late 19th and early 20th centuries come alive.

Before writing the Finding Billy Battles series, I spent some 27 years as a foreign correspondent for the Chicago Tribune. During that time I lived and worked in Asia and Latin America, including most of the places in which my books are set. Therefore, descriptions of cities such as Saigon, Singapore, Manila, Hong Kong, Buenos Aires, Veracruz, etc. are based on my personal experiences and observations.

During that time, I covered several wars, revolutions, and popular uprisings which greatly aided in the descriptions of conflict that arise occasionally in the trilogy.

My purpose in writing the series was to tell a compelling story that, while fiction, is grounded in accurate historical fact. As such, I was careful to use the vernacular of the time and to describe places and events as they were in the late 19th and early 20th centuries.

There is no great literary message in the books, other than to demonstrate that many people in the past lived remarkable lives filled with adventure, sadness, struggle, joy, and love just as today. They were not, as so often portrayed in the pallid black and white photographs of the time, stiff, lifeless figures without vivacity and depth.

The Finding Billy Battles series is targeted at readers who enjoy historical fiction topped off with a generous helping of action and adventure. It takes readers to an earlier time devoid of the relentless intrusion of today’s prevailing technology.

People who lived during Billy’s prime were not dominated by and yoked to technology the way so many of us are today. It was a time when the notions of “honor,” “fidelity,” and “duty” were guiding principles in most people’s lives. People were less harried and stressed and more disposed to stop and smell the flowers than their 21st-century counterparts.

If there is one message my books have it is this: Reading a book is a lot like life; you live it one page at a time. 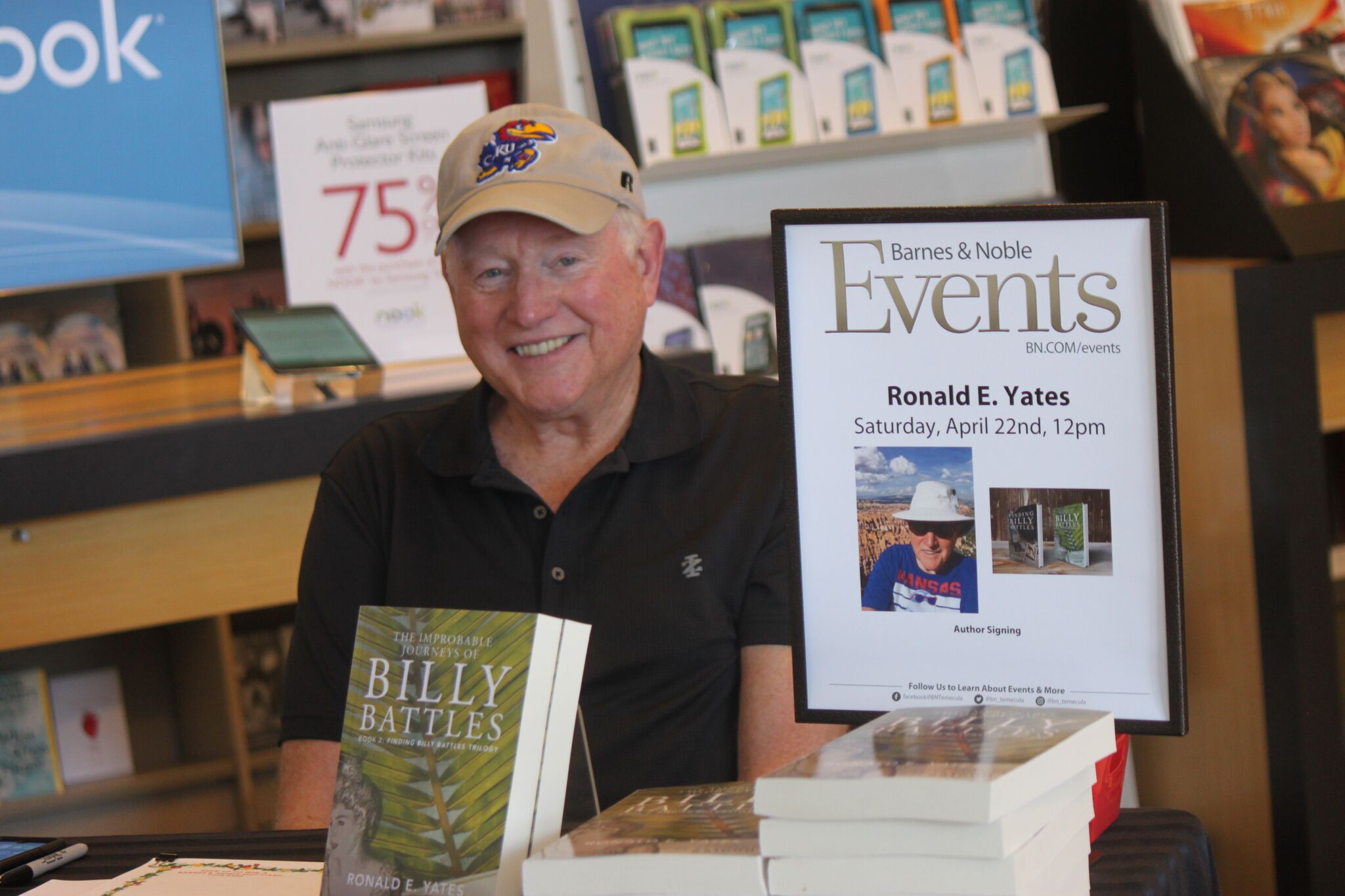 Ronald E. Yates is an award-winning author of historical fiction and action/adventure novels, including the popular and award-winning Finding Billy Battles trilogy. His extraordinarily accurate books have captivated fans the world over who applaud his ability to blend fact and fiction.

Ron is a former award-winning foreign correspondent for the Chicago Tribune and Professor Emeritus of Journalism at the University of Illinois where he was also the Dean of the College of Media.

His book, “The Improbable Journeys of Billy Battles,” is the second in his Finding Billy Battles trilogy of novels and was published in June 2016. It has won multiple awards, including the 2017 KCT International Literary Award, the 2017 John E. Weaver Excellent Reads Award for Historical Fiction, the 2016 New Apple Literary Award in the Action/Adventure category and First Place in the 2016 Chanticleer International Book Awards in the Literary Category. It was also a finalist for the United Kingdom’s Diamond Book Award. The first book in the trilogy, “Finding Billy Battles,” was published in 2014 and was a Kansas Book Festival Selection and a finalist for a Chanticleer Laramie Award. Book 3 of the trilogy (The Lost Years of Billy Battles) was published June 6, 2018.

Ron has been a presenting author at the Kansas Book Festival and the Los Angeles Times Festival of Books, among other venues. He is also the author of The Kikkoman Chronicles: A Global Company with A Japanese Soul, published by McGraw-Hill. Other books include Aboard the Tokyo Express: A Foreign Correspondent’s Journey through Japan, a collection of columns translated into Japanese, as well as three journalism textbooks: The Journalist’s Handbook, International Reporting and Foreign Correspondents, and Business and Financial Reporting in a Global Economy.

Before leaving the world of professional journalism where he toiled 25 years, Ron lived and worked in Japan, Southeast Asia, and both Central and South America where he covered several history-making events including the fall of South Vietnam and Cambodia; the Tiananmen Square massacre in Beijing; and wars and revolutions in Afghanistan, the Philippines, Nicaragua, El Salvador and Guatemala, among other places.

He lives in Murrieta, California and is a proud graduate of the William Allen White School of Journalism at the University of Kansas.

Greeting:  Welcome to the first ever “TREAT” Reads Blog Hop!   These members of RRBC have penned and published some really great reads and we’d like to honor and showcase their talent.  Although there were maybe 3-4 winners who were previously on this list but are no longer with the club, now all of the listed Winners are RWISA members!  Way to go RWISA!

We ask that you pick up a copy of the title listed and after reading it, leave a review.  There will be other books on tour for the next few days, so please visit the HOP’S main page to follow along.

Also, for every comment that you leave along this tour, including on the HOP’S main page,, your name will be entered into a drawing for an amazing gift card to be awarded at the end of the tour! 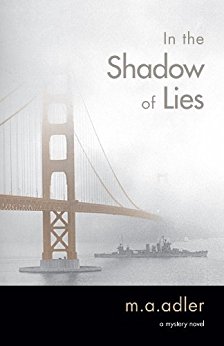 Richmond, California. World War II.  Marine Lieutenant Oliver Wright comes home from the war in the Pacific injured and afraid his career as a homicide detective is over.  But when an Italian Prisoner of War is murdered the night the Port Chicago Mutiny verdicts are announced, and black soldiers are suspected of the crime, the Army asks Oliver to find out the truth. He and his canine partner Harley join forces with an Italian POW captain and with a black MP embittered by a segregated military. During their investigation, these unlikely allies expose layers of deceit and violence that stretch back to World War I and uncover a common thread that connects the murder to earlier crimes. In the Shadow of Lies reveals the darkness and turmoil of the Bay Area during World War II, while celebrating the spirit of the everyday people who made up the home front. Its intriguing characters will resonate with the reader long after its deftly intertwined mysteries are solved.

This blog hop sponsored by:  4WillsPublishing